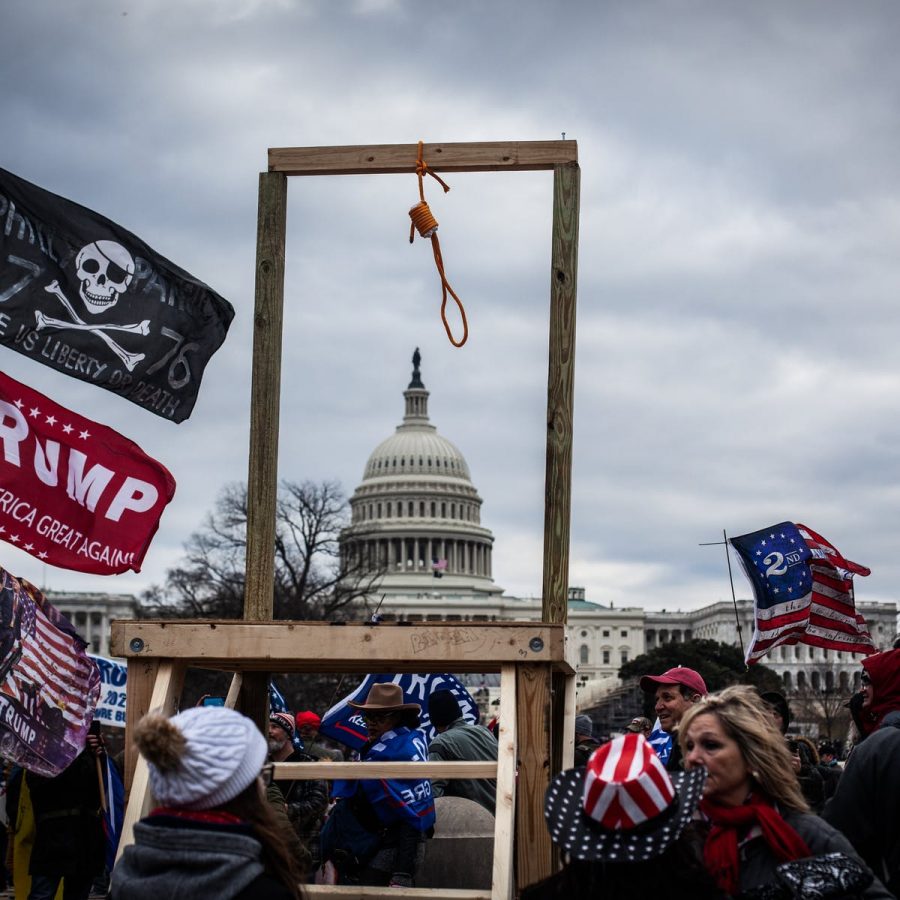 The events of January sixth, 2021, will undoubtedly go down in history. For those of us who watched the news that day, the images will forever be glued in our minds as a reminder. The insurrection struck fear in many Americans for our future, and made us wonder: how could something like this happen on the grounds of our Capitol? The very embodiment of our democracy. However for some it groups of people the hate symbols utilized and words spoken meant even more. For example for Jews it was an awful reminder of the past and the horrors endured, and a chilling realization that these views are still prevalent in today’s society.

Anti-semitism is defined by Google as “hostility to or prejudice against Jewish people.” We know anti-semitism and hate crimes as a whole have been on the rise these last couple years, yet the insurrection showed us undeniably front and center, something that couldn’t be ignored. Many different anti-semitic symbols were put on display that day, both hidden and in open view with their own deeper meanings. So let’s break down these symbols that the world saw and what they mean.

One of the most recognizable images is that of a man identified as Robert Packer, who according to NPR was wearing a black sweatshirt with a skull and crossbones and words “Camp Auschwitz” in bold letters. The words Camp Auschwitz refers to the concentration camp in Poland where over one million people lost their lives. NPR also reported the words “Arbeit Macht Frei” which translates to ‘Work Brings Freedom” were also on the sweatshirt in reference to the slogan that hung at Auschwiz’s entrance. The sweatshirt is a shocking symbol of anti-semitism and extremist white supremacy values, and a horrifying reminder of the Holocaust, almost seeming to make light of it.

One of the many flags seen along with the confederate flag, was one identified as the “Kekistan flag” according to The Washington Post. Kekistan is a fictional country developed by the far-right where political correctness is outlawed. The flag itself is derived and based off the Nazi swastika, one of the most known symbols of anti-semitism and white supremacy.

A lesser used symbol by the far right is a cartoon frog known as Pepe. According to The Washington Post, while it is a common internet meme, it has been used in many different depictions by the far right. The right often photoshops the character into SS uniforms (Hilter’s security force), and other extremist imagery.

There were full size gallows erected outside the Capitol during the riot. According to Brandeis University, this was a direct nod to events in the novel “The Turner Diaries,” in which a “day of the rope” happens where those who betrayed their race are lynched. While not only being a horrific reminder of the racism in our past, and horror inflicted against many African Americans, this is also directed as a threat to the Jews. Brandeis professor Jonatha Sarna notes that the novel depicts “a war to the death with the Jew,” where Jews are warned their “day is coming.”

Besides the symbols shown, many of the people and groups at the insurrection are known to have been founded around anti-semitic conspiracy theories and values. The Washington Post stated that “Our research finds that identification with QAnon, Christian nationalism, Trump and anti-Semitism are tightly linked.” Brandeis University notes that calls to exterminate Jews are common in such groups. For example, QAnon is known to follow many anti-semtic conspiracy theories, target Jews through social media, and believe them to be betrayers of the white race. Members of the Proud Boys, another group present at the insurrection, also are known for promoting anti-semitism. One of the group’s leaders has promised to “confront the Zionist criminal who wish to destory our civilization.” (Brandeis University)  In addition, there were a plethora of white supremacist symbols and confederate flags that represent some of the darkest moments in our nation’s history.

Although the anti-semitism present was terrifying for all Jews, it was an even more distressing reminder of the Nazi era and its resurgence to Holocaust survivors still alive today. Dr. Eva Umlauf, a survivor of the Auschwitz death camp, told the New York Times: “I couldn’t believe what I was seeing, it really broke a taboo. I never would have believed that was possible from Americans” adding that “As Jews, we tried to get our children to America so they could live in freedom and safety.” She and fellow survivor Eva Fahidi, could have never imagined such a thing happening on American soil. Eva is also quoted telling New York Times “Americans and freedom, they were one and the same, they were synonymous.” She added that after all it was Americans of the US army that freed her from the Nazis, although she had noted the rise of anti-semitism, she held onto a belief that America, her savior would remain an exception.

There is no denying that hate in general has been on the rise these last couple years in America. All we can hope for is that the insurrection can serve as a lesson to Americans and work to unite us together against hate and anti-semitism, instead of further dividing us.