Is the NFL helping the fight against Racism? 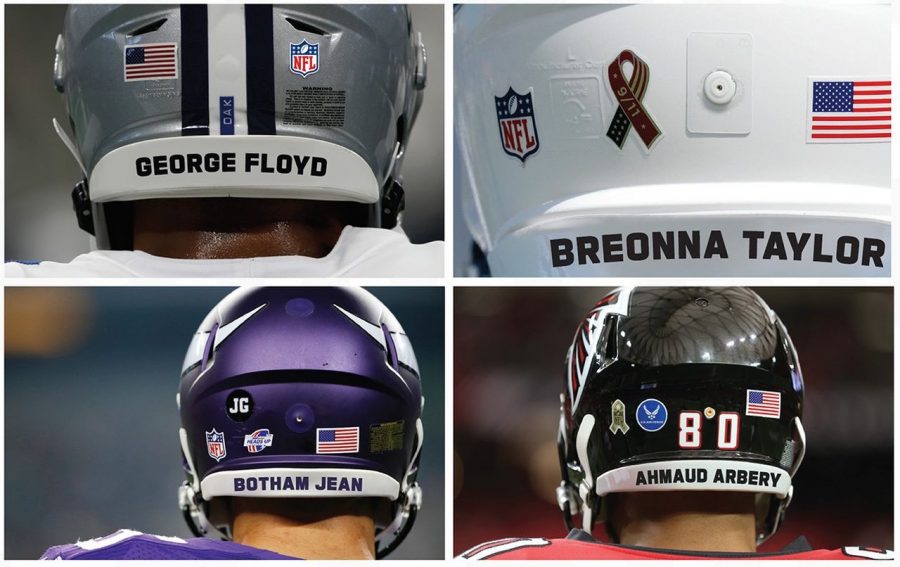 When I was watching the Superbowl, something caught my eye. During the commercials, I saw footage of some players with helmets that had the names of people who had been victims of Police Brutality. Some of these names included more recent victims like George Floyd and Breonna Taylor, some of them were older like Eric Garner, who was killed 7 years ago. I’m not someone who watches football religiously, but I had never seen this before, and it seemed strange to see them taking a stance against racism so publicly. This change, as well as the recent change in name to the Washington Football team from Redskins, is clearly inspired by the events of last year. The BLM protests that not only happened in this country but many others around the world have shaken the NFL into these new changes. But is this change, for the right reasons? Is it because they generally feel differently and what to eradicate racism from the organization, or is it just cover to make sure they keep up with the times? Maybe I feel cynical where I shouldn’t, but those helmets didn’t make me feel happy or hopeful as I believe they should have.

This championing social justice feels off because of how sudden it is. The actions they are taking seem in stark contrast to just five years ago, as outlined in this BET article when “ Colin Kaepernick spearheaded a protest against police brutality and injustice against Black people by kneeling during the national anthem. It sparked controversy and little to no support from the NFL.” There was little sympathy for Kaepernick. Fast forward to now, it seems like he would be championed by the NFL because he would be doing his protest at a perfect time where they can capitalize on it. Kaepernick himself is still not on a team and hasn’t been on one since his last season with the San Francisco 49ers in 2016.

It’s also worth bringing up black coaches who aren’t being hired by owners. If the NFL wants to diversify, one of the first things they should do is hire coaches from different backgrounds. According to this article from the Atlantic, “ about 60 percent of NFL players are Black, but during the 2020 season, only three of 32 franchises had Black head coaches. It’s clear that more diverse hiring needs to be the start for any social justice promotion to have any impact.

The NFL’s new actions are best articulated in this USA Today article. The article was written last September after it was announced that different end zones would have  “End Racism” written in them. The article describes that as the “ most ineffective initiative proposed by a league that often tries to get by with doing the least amount possible. It is a performative gesture that, whatever good intentions are behind it, accomplishes nothing.” I think that sums up my feelings, ultimately the message is good, and it’s better to say something than to stay silent. However, it’s like a bandaid on a broken arm, the sentiment is nice, but I need a cast. Maybe that’s an impossible wish; it’s not like anything the NFL does is going to magically stop police brutality. But they could put a firm stop to racism within its organization.

At the end of the day, there really is no such thing as bad publicity, and I think the NFL should be using its stature to help foster change. If the message feels fake and ineffectual, that’s because, in many ways, it is. I’m not expecting police brutality to end because of some messaging. Still, if there were more coaches of different races, and if stories like Kaepernick’s stopped happening, I think the message might have its intended power.