My Life in NYC During a National Pandemic 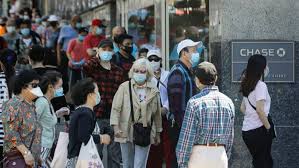 There is no denying the Coronavirus has flipped all of our lives upside down: schools online, everything closed, and face masks are just some of the many new practices. Everyone has been affected in one way or another, some much more than others through the fatalities caused by this deadly virus. One place that has been hit harder than anywhere else is the famous New York City. According to the New York Times there are over 200,000 cases and at least 21,000 deaths within New York City as of June 8th. New York is seen as a magical world to many, and home to me, however things have significantly changed here for the foreseeable future.

In the early stages I remember there being this uneasy sense around everything. I’ve never felt unsafe in New York, but something had changed – people were avoiding each other more, eyeing everyone carefully. You could feel the anxiety in the air. I remember being in a store doing a shop with my mom and someone coughed and everyone in the store turned around and looked at the person, proceeding to take a couple steps away from them. This community that had always felt friendly to me had suddenly turned hostile out of fear.

As the cases rose and the warnings increased, it was clear that things were going to change. My mom and I went out to our last big shop dressed in gloves and masks as people panic-bought supplies. Soon after, we decided there would be no more going out -the risk was too high.

I live with my elderly grandparents while my mom lives a couple blocks away in an apartment with my brother. We could no longer risk going into stores since older people were so susceptible to this illness. There were many discussions on whether or not I should move out and into my mom’s apartment, so my grandparents could be isolated as many health professionals advised. We, however, decided to take the risk; my grandparents live on a second floor walk up and needed help, since from then on everything was to be delivered. Even within my family unit there was anxiety: if anyone was to cough, my grandma would become terrified and if me or my grandfather were to touch our faces, my grandmother would demand we wash our hands immediately. As much as my grandmother drove me and my grandfather insane, I give thanks to her methods since none of us are or have been sick.

Everything seemed to happen overnight. One day we had still been going out, and the next we were locked inside only to go out for short walks with the dog. Stores closed down like never before and the streets seemed deserted as the crazy New York traffic disappeared. We had to change the simplest of things. Whenever a package came, we had to leave it downstairs for at least twenty four hours and then we were to wear gloves when opening it. When food deliveries came, we had to come up with a system: I would bring the stuff upstairs with gloves and my grandparents would clean off many items. Speaking of cleaning, we were now sanitizing everything from the doorbell to the light switches. I’ve never seen this house so clean before.

Going outside was a whole new experience altogether. We always wear masks when we are outside, everyone does. The few people spotted without them are often quickly told off by other people. Whenever someone comes down the street you are walking on, both groups immediately move to the other side to avoid any contact whatsoever. Police have started to break up groups of people if they don’t seem socially distanced.

Despite all the hardship and death, New York is still New York and, as always, has come together. The city and its leaders have given many resources and have kept us updated through the media. There is this overwhelming sense of community in NYC and people have been supporting each other. For example, all over New York there have been many organized efforts in order to show gratitude to our essential workers. At seven o’clock every night, we gather on our stoops with pots and pans as we participate in the “seven oclock clap for essential workers”. This clap is practiced throughout the city’s boroughs as people cheer on medical and essential workers.

Although my life has changed, I am very privileged that all of my family is healthy and can stay and work from home. It’s scary being in a place like NYC during this time but I also have the most faith in NYC. All I can say is that I hope this city continues to flatten the curve and people stay safe.