SPICES Support Many Religions at SSFS 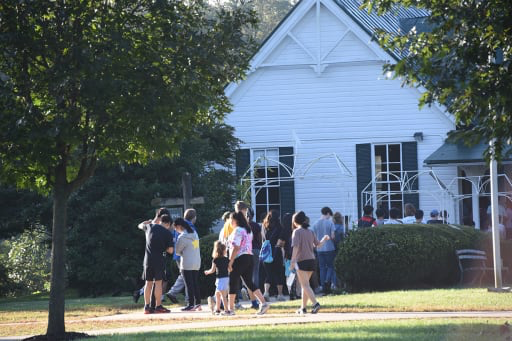 Sandy Spring Friends School has many significant attributes that illustrate its unique community. Out of all of the characteristics that make up our school, religion is a crucial aspect. Throughout our emphasized Quaker values and diverse religious student population, spiritual practice plays a dominant role in the moral lives of the SSFS student body.

The Quaker values are repeatedly incorporated into the SSFS curriculum as a way to develop these ethics. It is a part of the World History class and taught during Ninth grade Freshman Seminar. The student body as a whole experiences Quaker learning through Meeting for Worship. The students meet two times a week and practice this religious tradition that emphasizes silent worship and reflection from within. We are continuously taught Quaker values such as the SPICES. These stand for Simplicity, Peace, Integrity, Community, Equality and Stewardship. The SPICES are a moral code that expands throughout the SSFS community. All of these Quakerism practices that we learn about at SSFS also correlate significantly with the various religions practiced from within the student body of Sandy Spring. This is why I asked a handful of my classmates the question: How do the aspects of Quakerism we learn in school correlate to the diverse religious practices of students at SSFS?

The SPICE Simplicity is testified as the belief that one should live a simple life, allowing a person to focus on the more important aspects of life. Meghan Scott is an Atheist who relates to the testimonial of simplicity. When asked about the simplistic ideals within her belief system she responded, “Not going to church, and not following religious holidays, in a manner.” She explains how there is nothing imposing on her to go out and practice religion. Another simplistic value is the fact that Meghan does not have a religious community outside of school and no outside commitment to religion. The lack of her outside religious commitments allows Meghan to focus on the present and maintain a pleasantly simplistic lifestyle. On a final note, Meghan expresses how not being raised in a religious way means she had different childhood experience than those who were religious. She didn’t have baptism or other rituals and the lack of these religious rituals added a sense of simplicity to life.

The SPICE Peace is the belief in nonviolent opposition to evil. Mecca McCain is a Protestant Christian who sees the ideals of Peace within her own religion. Her religion has influenced her to believe that, “Everyone is human. And [while] there are different ways to categorize others [like] race, ethnicity and gender, at the end of the day, anatomy wise, we are all the same. So we should treat others the way [we all] would like to be treated.” Mecca emphasized that humans should respect differences, “Acknowledge knowing differences shouldn’t bring you farther from someone, because at the end of day we are all the same.”

The SPICE Integrity is listening to the small voice within and being led by it. It illustrates a way of life in which one lives true to oneself and true to God. William Henderson and Gus Ross view Integrity within their practiced religion of Christianity. They explain that if you are not held with the highest integrity, then you wouldn’t be honest with yourself or with God. They emphasize the need for a good moral code in their religion, to be righteous and, “just and do what is right in the name of God.” They said that practices that show integrity within Christianity are when you are praying to God and when you are living day to day life while achieving high moral ground. In addition to this, another representation of Integrity within Christianity is the fact that lying is a sin. They explain how the Ten Commandments, which is a significant guide, can aid you to follow the correct ideals of Christianity.

The SPICE Community is the practice of building strength within the group of people who share similar values. Eve Murdock and Sophia Lindner practice the religion Judaism and view a strong community within their religion. They explain how everyone joins together as one on Fridays and Saturdays to practice Shabbat. They sing and pray as a whole, singing songs that the entire community knows. Eve explains how everyone knows each other no matter where you come from. Sophia says she feels community most through song. She says, “We sing in song circles things that are ancient; yet new tunes have been developed through history. When other people know the same songs we come together and feel stronger as a religious community.” They express the fact that Quakerism and Judaism balance each other well, because Judaism is about noise and Quakerism is about silence.

The SPICE Equality is the value that individuals are treated the same regardless of exterior characteristics. Revati Buchwald practices the religion Hare Krishna. When asked about the equality ideals within her religion she says, “It doesn’t matter your economic status or your wealth, or any material aspect of your personality. In my religion, everyone’s equal in the eyes of Krishna or God.” Revati explains how her religion embraces this ideal through different practices. One practice is the celebration Holi, a spring celebration where those who participate throw coloured powder on one another and engage in joyous activities. Revati explains how this emphasizes the ideal of equality because, “By the end of it every looks the same, covered in color, and by concealing our physical appearances it forces people to look at what is on the inside and love each other for our personalities.”

The SPICE Stewardship is the value of taking care of the things that need it. Richa Sharma practices Hinduism. She says that the religion, “Emphasizes the need to take care of mother earth because she provides everything. There is a festival that specifically honors mother earth called Govardhan puja.” In addition to this festival, Hinduism celebrates Mother earth by worshiping the Goddess Prithvi which is the Hindu Goddess of Earth. She is known for a nurturing and supportive nature. By celebrating mother earth and appreciating her gifts through recognition, Richa’s religion illustrates the strong value of stewardship, love and gratitude.

All of these religions blend beautifully with the Quaker values that we encounter everyday, encompassing the growth of worldly traditions when they interact together.