Will You Still Need A Driver’s License? 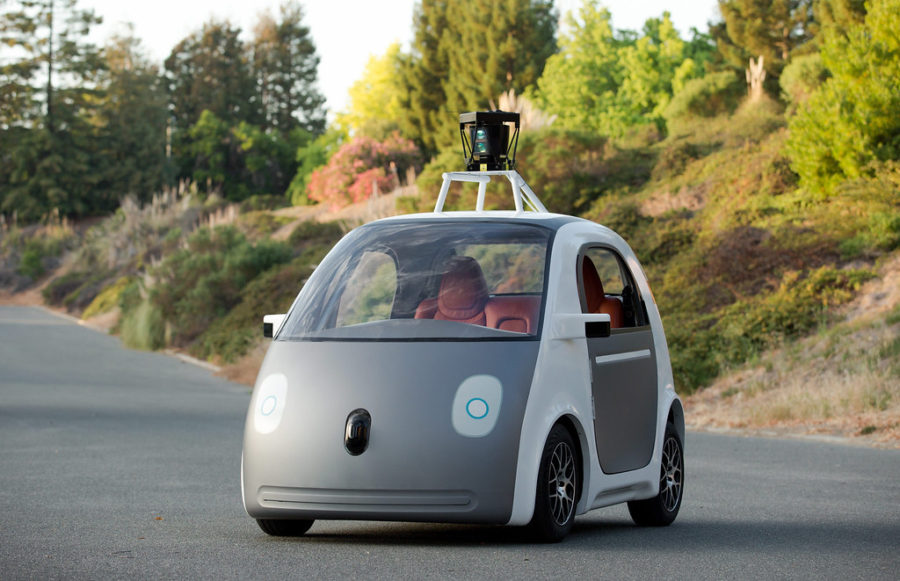 This image provided by Google shows a very early version of Google's prototype self-driving car. The two-seater won't be sold publicly, but Google on Tuesday, May 27, 2014 said it hopes by this time next year, 100 prototypes will be on public roads. (AP Photo/Google)

For a high school student to receive their full license in Maryland, it requires the student to complete the Department of Motor Vehicle Services DMV written portion of Driver’s Education and have driven with an instructor for 6 hours. Due to the 60 hours of driving practice, you have to beg parents, grandparents, older siblings and almost anyone else you know to allow you to have time behind the wheel (well, at least I did!). In addition, to receive your full license, the holder must be traffic violation free for about a year. From learners permit to full license, it takes a minimum of one year and eights months. What if we could cut out the middleman, the DMV? Would you be willing to allow a self driving vehicle or partially self driving vehicle to shuttle you places, or give up your privilege to drive? With modern innovations, in the near future ADS (Automated Driving Systems) will drive people without any or minimal human input.

Self-driving cars and partially self-driving cars are making significant advances in the modern twenty-first century. Almost all new vehicles on the market, whether it is cars, trucks, or vans, have Automated Driving Systems (ADS). ADS is approaching widespread usage and research, especially by popular companies such as Tesla, Google, Microsoft, Uber, Lyft. However, the new technology (ADS) has minimal legislations and regulations dictating what these large corporations can and cannot legally due. With the minimal regulations and legislations, is the general public ready for ADS and is it safe?

Most cars built after 2012 have some level of ADS. ADS is broken down into five levels, according to the National Highway Traffic Safety Administration. First level is partial assistance, where the vehicle does not have any physical control on the driver, but provides assistance i.e cameras on the front, back, and side of the vehicle, a system to alert the driver of objects in the path of vehicle, blind spot monitoring technology, and an alert if the user is drifting. The second level of autonomy has minimal control of vehicle, but still requires a physical driver. A partially autonomous vehicle could be a vehicle with lane correction, essentially the vehicle auto adjust wheel, so the vehicle remains in the center of the lane. The third level of autonomy would be a vehicle with capabilities to monitor the environment without a driver, but a person is still necessary. Typically a vehicle would monitor the environment with cameras, sensors, etc. the vehicles systems would then analyze the data and be able to determine whether conditions and the objects in the path of the vehicle. The fourth level of autonomy would be a vehicle completely autonomous under ideal conditions. The vehicle might contain automated parking, potential Collision correction, along with the features of all levels of autonomy. The fifth level of autonomy is a vehicle completely autonomous under all conditions.

Self driving vehicles don’t get fatigued like a human operator nor do these vehicles consume substances that affect their ability to perform. Generally it takes out the unpredictability of human nature. A self driving vehicle is methodical, efficient, and precise in its decision making. The computer systems do not have emotions, so its decisions are entirely made up of data from its analysis. Self-driving technology could simply reduce crashes because it takes the human ‘oops’ factor out of the equation. Hence, self-driving vehicles would be a good substitute for the elderly whose physical and mental capabilities are waning. ADS could provide safe travel for the physically disabled, mentally disabled, or even inebriated individuals who need a safe way home.

What could use improvement?

Sadly, there have been a number of highly visible accidents with ADS. In January, 2016, The Guardian ran a news article about a man who was killed, when his Tesla crashed into the back of a larger vehicle and again in May, another Tesla crashed into a tractor trailer. The tractor trailer was white and the sensors mistakenly perceived the white truck as part of the scenery. The National Conference Of State Legislature lists twenty nine currents states where driver-less cars are legally being tested on the road. Most of the cities and states in which autonomous driving testing is taking place (i.e California, Alabama, Florida, New York), tend to have relatively dry weather conditions and simple road systems that make it easier for driver-less vehicles to function. California is also the only state in America that requires companies testing driver-less cars to submit reports detailing each accident involving autonomous vehicles on public roads.

In addition to visibility issues, there have also been security and privacy risks. According to TrendMicro, a leading IT Security company, advanced technology in modern vehicles (i.e GPS,RFID,Wifi, Sensors, etc) are susceptible to hackers’ penetration, exploitation, or modification. In 2015, United States researchers demonstrated a vulnerability in the Jeep Cherokee engine, allowing Hackers to gain control of the engine through the internet. The results and process of the experiment can be found in greater detail on Wired Magazine. Frequently hackers are finding new ways to exploit modern technology. Hackers and researchers have found ways to remotely gain access to vehicle systems(engine, alarms, lights, door locks, etc.). Without substantial remediation of privacy and security issues of ADS vehicles and larger sample data on “How, When, and Where” an ADS vehicle was involved in a collision, we cannot accurately determine how safe ADS vehicles are.

At this time, there simply isn’t substantial enough data to verify the safety accurately and fairly, but we do have data on fatalities caused by human error. In 2016, The National Highway Traffic Safety Administration reported that 6,693 people were injured a day in car related incidents and 9,477 alcohol-impaired driving fatal crashes occurred in the same year. On one hand, ADS vehicles significantly reduce the amount of driving and pedestrian fatalities by removing the human factor. On the other hand we are introducing a technology factor that is not well documented. Technology is continuously evolving and changing, and therefore consumers must ask themselves whether they are going to push back against the future or embrace and adapt to the new age.