The Climate Strike in Less Than 850 Words 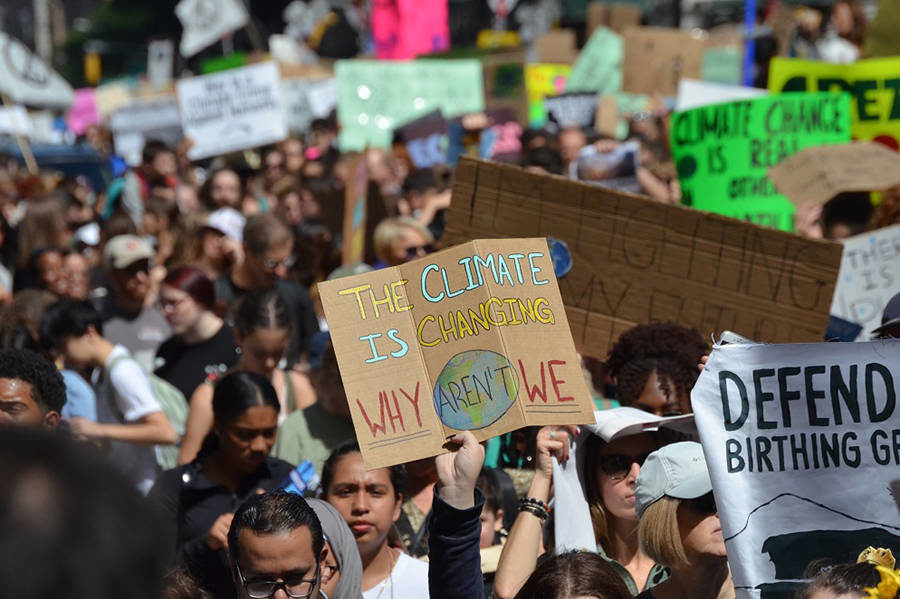 Each generation of young people coming up in the world have a defining issue that they debate, protest, and dedicate themselves to making a difference with. The generation of young people growing and preparing to take on the world has locked their eyes on a completely new target: climate change. It is clear to see that climate change will be the defining issue of this time in history, so what are young people doing to make a difference and change our planet’s bleak fate? The only thing they can do: use their voices to protest and spark change.

According to the Washington Post, since the dawn of the 20th century, earth’s average temperature has risen about 1 degree Celsius . While that may not seem like a significant temperature increase, it is, bringing with it catastrophic extreme weather around the world as well as the gradual melting of the Arctic and burning of the Amazon. While there is no easy solution, there are most certainly actions that world leaders could take, such as instituting clean energy programs and speeding efforts to become carbon neutral. History has proved that in times of crisis, governments have the ability to step up and respond to the issue. Today, the United States government, along with many other nations, has both the resources and ability to at the very least contribute to the growing climate crisis. Yet, they have in large turned a blind eye to climate change as a whole, leaving it up to those who truly care about the planet to go out, protest, and make a change of their own.

The protest truly began a year ago in Stockholm, Sweden when a young schoolgirl named Greta Thunberg, after years of depression over the planet’s impending doom, decided that a change needed to be made within her own country. Thunberg first began with schoolwork strikes on Fridays, but soon decided that greater action needed to be taken. She began skipping school and seemingly permanently affixed herself to the wall outside of the Swedish Parliament in Stockholm, forcing politicians and lawmakers to see her sitting there, protest sign in hand, demanding a change in climate policy. So far, Thunberg’s approach to protest has been simple: be so relentless that those in power have no choice but to notice.

Such was the case with the series of climate strikes that took place on Friday, September 20th. The energy and sheer desire for change at these marches was practically palpable, reflected by the fact that the strikes were among the largest youth mobilizations in history. According to Time, over four million people in 4,500 strikes worldwide took to the streets armed with signs and determination in order to catch the attention of lawmakers and political leaders. The message of these protesters was staggeringly clear: they demand change to climate policy, and they want it now. Of those four million protesters, over 600,000 were from the United States alone, attending more than 1,100 strikes registered there. Most notable were the strikes in Washington D.C., where protesters rallied right outside of Capitol Hill, sure to gain the attention of lawmakers, and New York City, among the largest of the strikes, led by organizer Thunberg herself. Similar scenes played out around the world, with marches everywhere from the United Kingdom to Hong Kong to Kabul.

The timing of September 20th’s climate strikes was no mere coincidence; the United Nations’ climate summit was slated to begin on September 23rd, just three days after the climate strike. This makes the protests even more meaningful, as they had an opportunity to enact real change as a direct result. When the UN convened, many ideas and plans for combating global climate change were discussed, partially impacted by an emotional speech by Greta Thunberg, who queried leaders, “How dare you continue to look away and come here and say you’re doing enough when the politics and solutions needed are still nowhere in sight? You say you hear us and that you understand the urgency, but no matter how sad and angry I am, I do not want to believe that, because if you really understood the situation and still kept on failing to act, then you would be evil, and that I refuse to believe.” Yet, even with all the clear calls for action, no real change or agreement has come out of the United Nations summit. However, that is not to say that the climate strikes were useless; they still raised awareness and allowed an opportunity to educate the masses on the issues plaguing our very existence.

Positive change is not inevitable – but it is not out of the question. However, in order to bring any sort of change at all, everyone needs to keep going. Continue to protest, continue to rally, continue to make your voice be heard. Eventually, the voices will grow too loud to ignore, and the only way to quel them will be a real change for the better.