Pop Artists Explore Religious and Feminist Issues Through Their Music 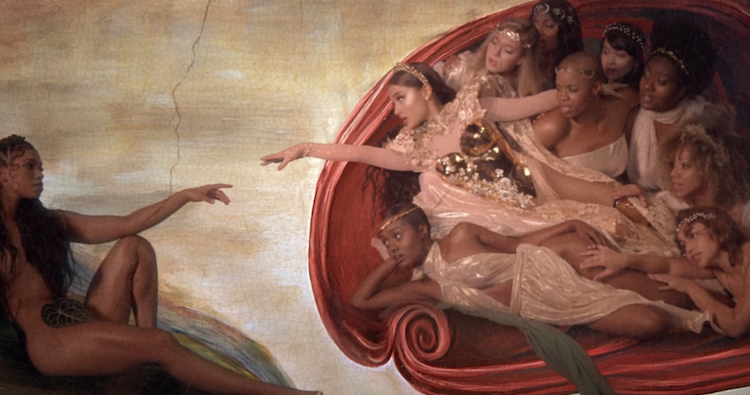 In the music industry today, we are seeing more spiritual and religious references. In particular, three mainstream albums released in the past year have raised religious questions. Sweetener by Ariana Grande, When We All Fall Asleep, Where Do We Go by Billie Eilish, and Free Spirit by Khalid. These young artists explore concepts of life and death, as well as heaven and hell. This has brought up varying religious interpretations of these songs amongst fans and music reviewers.

Ariana Grande’s song, God is a Woman raises questions about the gender of God. It challenges the standard belief of God’s masculinity. The Catechism of the Catholic Church says  “God is neither man nor woman: he is God.” Yet, the use of “he” in this statement is still present. Other religious institutions and centers have also expressed that they are trying to use more gender neutral pronouns when speaking of God. In the music video, Ariana Grande portrays herself as God. She had full control of the universe and influence over “man.”

Some journalists have questioned the way Ariana Grande challenges popular religious beliefs. Journalist Jenny Singer explores the idea that speaking of a female god is considered blasphemous. Her article: “Ariana Grande’s ‘God is a Woman’ Makes Us Wonder- Why is God a ‘He’” touches upon this idea. She says, “If you’re a truly religious or spiritual person you should find it blasphemous to refer to God as a male — this brings God down to human levels. Why should God be diminished just because language is limited?” If God has supreme power, then why should God be bound by gender characterizations? Ariana Grande expresses a strong belief that continues to stir and challenge the beliefs of her fans and listeners today.

Recently, other artists have explored what God’s gender as well as race may be. According to the Guardian article, “God is a Woman: Ariana Grande Taps into a Long Herstory of a Female Lord” by Arwa Mahdawi, an artist from Chicago challenges standard beliefs about God. Harmonia Rosales portrays God as a black woman in a piece based off of the Michael Angelo fresco “the Creation of Adam”. Rosales wants to challenge the norms of white men being shown with power and dominance. She also says it makes sense that God be a woman. Humans were born from the womb and God should be a maternal figure for the human race.

Another song that raised religious and feminist questions is All the Good Girls Go to Hell by Billie Eilish. In this song, she refers to God, as well as the devil, with feminine pronouns. The lyrics “Even god herself” contrast the common use of the words “heavenly father.” This song has had similar responses to Ariana Grande’s song; however it also challenges broader concepts. Eilish compares heaven to a suburban American life in the lyrics, “Pearly gates look more like a picket fence.” By making this comparison, she says that people are striving for this picture perfect, middle class, American lifestyle. She furthers her argument by saying that “all the good girls go to hell” implying that the people who fit into these stereotypes don’t benefit in the end. This challenges the American culture and ideas around “privilege” in our country. Eilish along with many other young people question the standard American lifestyle. Another concept that Billie Eilish touches on in her song is climate change. The Vigilant Citizen is a site that looks at the esoteric meaning behind elements in pop culture. They speak about this in their article, “The Dark meaning behind “all the good girls go to hell” by Billie Eilish.” The line “Hills burns in California” is said to be a reference to the California wildfires which are blamed on global warming.” Overall Billie Eilish speaks about pressing matters within society by challenging popular beliefs and norms.

Khalid also has many spiritual references throughout his album in songs like Free spirit, Heaven, and Alive. In this album you can hear the young singer question the beliefs of society regarding spirituality and gender norms. He grapples with the idea of what happens after death and does lots of self- reflection. He also challenges the beliefs regarding modern day “masculinity” in his song Self. Khalid says, “Does my raw emotion make me less of a man?” Compared to his first album American Teen, Khalid draws his listeners more into his thoughts and focuses on less superficial emotions.

Ariana Grande, Billie Eilish, and Khalid are just a few mainstream artists who explored religious and gender beliefs within their music. These young influencers are sending out messages that challenge some popular American ideology. Their powerful song lyrics demonstrate the burning search for identity and the longing to find a spiritual path. These spiritual and religious references break away from the Eurocentric and patriarchal beliefs of Americans today.