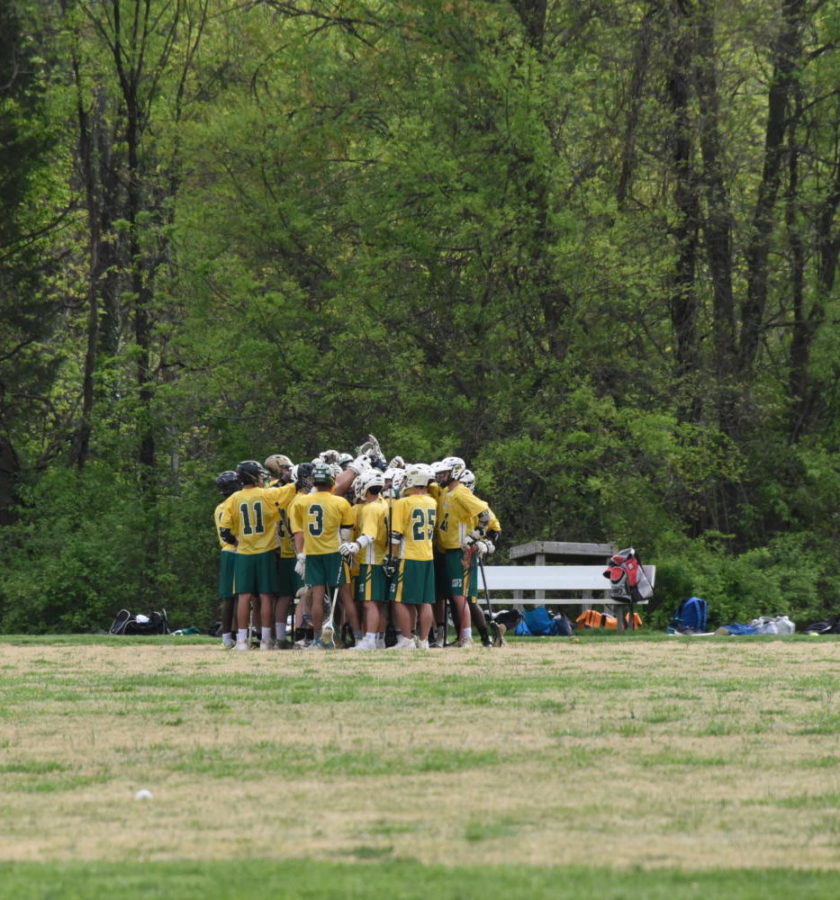 While varsity soccer and basketball have historically ranked among the more popular sports at SSFS, this year, lacrosse is making a comeback.  This year’s team boasts a strong group of young men who are driven, competitive, and ready to fight, led by two experienced coaches, head coach Steff Kerr and assistant coach Josh Moffatt.

One great thing about this year’s squad is the diversity of ages and skill levels. There is a fair mix of experienced players and coaches and new players. The large amount of novices definitely affects the team dynamic in a positive way.

Take Greg Tarnavskyi, a senior, who is new to the sport: “I only started this year,” he says. “I like the coaches, teammates, practices and workouts.”

Fellow senior Brodie Stewart, on the other hand, has been playing since he was about 9 years old. Despite his years of experience, he enjoys seeing skilled players work with new players and is impressed with how quickly they pick up techniques.

When asked how he feels seeing seasoned players competing alongside their new teammates, Steff said, “It is one of my favorite things about coaching. They are both competing and mentoring. Most importantly, we are having fun together.”

Josh reflected that if new players are willing to give 100 percent, “The coaches will give you an opportunity.”

A big difference between our team and others in the area is that we challenge the norms of lax culture. When someone assesses high school lax teams, they usually see a concentrated group of guys who are so immersed in the sport because they have been playing so long. The term “lax bro” has a negative connotation and stereotype of white lacrosse junkies that use the sport more as social currency than an example of athleticism. However, our team is made up of a group of young men who are connected more by their love for the game than for their sense of athletic or social competition.

Steff told me, “You can love the sport without being a ‘lax bro’. Josh and I are a prime example of this.”

Probably the most important part of the team is the coaches. Our team is built on a rock-solid foundation of experience and wisdom. Steff has been playing the game since 1987, and Josh actively played for 10 years and has coached for 12 years.

I inquired about what it is that draws them to the sport, why they chose to return, and the effect their leadership has on the team and its future:

“I was inspired to return to coaching because of the great partnership– the fact that I could be assistant coach and Steff could be the head coach,” Josh elaborated.

“I love that there is a group of people all striving to get better,” Steff comments. “There is a real growth mentality.” He returned to coaching because it is where he learned to play.

Our team would not have so much promise had it not been for the leadership of Ari Preuss, a former SSFS history teacher. According to Steff, Ari “brought lax to Sandy Spring…[and] he taught me to play.” He established himself as a pioneering coach in the area, developing a lax program even before Good Counsel and Georgetown Prep. He inspired Sherwood to put a team together.

Our team brings a lot to the table, particularly in light of its historical legacy as one of the oldest lacrosse programs in Montgomery County. There are so many great things about Sandy Spring lacrosse: a fresh roster, seasoned coaches, and experienced players, to list a few. If the team continues to work as a unit and support all its members, there is no doubt the future will be prosperous.